Cody Kommers, my research assistant, presented this poster at SfN in Washington, D.C (2014)

Although the hippocampus is well known to contribute to the storage and retrieval of long-term memories, emerging data suggests that the hippocampus may also contribute to the online maintenance of task-relevant representations in some tests of working memory. To the degree that hippocampal mechanisms serve to facilitate performance on short delay memory tasks, individual differences in hippocampal microstructure could contribute to across-subject variance in working memory performance. To examine the relationship between hippocampal structure and function, we obtained the diffusion-weighted images (DWI) of a large cohort of subjects from the Human Connectome Project MRI dataset. We used the DWI to compute diffusion tensor images (DTI), which in turn were used to generate whole-brain mean-diffusivity (MD) maps. MD in deep gray matter has been construed as an indirect measurement of local microstructural deficits (Kim et al., 2013). Thereby, we aimed to assess the underlying integrity of each subject’s hippocampal gray matter and use examine whether these measures can account for variance in memory performance across subjects. Hippocampal regions of interest (ROIs) were identified using Freesurfer’s automated segmentation algorithm. Average MD within the left hippocampus was found to be significantly correlated with performance on a Working Memory List Sorting Task. This result is consistent with prior work showing that hippocampal MD serves a predictor for verbal and visuospatial memory (Carlesimo et al., 2010). Furthermore, MD along the Fornix (acquired from the Johns Hopkins White Matter Atlas) also significantly correlated with performance on the same task. This result illustrates that in addition to local integrity, the health of the hippocampus’s primary output tract is equally as important in explaining behavior that purportedly depends on hippocampal circuitry. This current study extends these previous findings and contributes to the debate surrounding the role of the hippocampus in working memory. We plan to conduct further analyses aimed at characterizing the potentially important role of fronto-hippocampal connectivity in working memory performance. 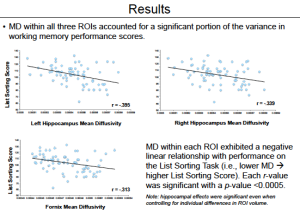